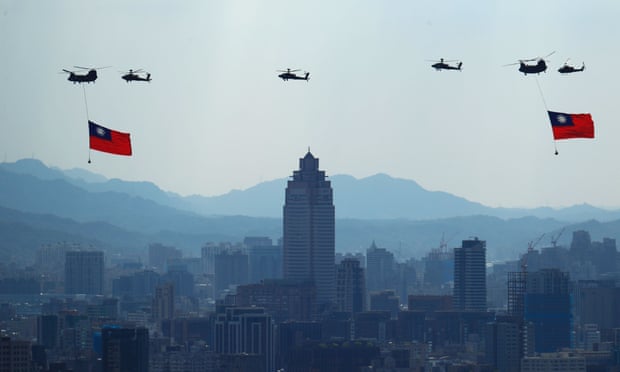 Taiwan’s president, Tsai Ing-wen, has said the threat from China is growing “every day”, as US president Joe Biden criticised Beijing’s recent actions in the Taiwan Strait, calling them “coercive”.

Tsai told CNN “Taiwan is on the front lines” in the fight for democracy and that the Chinese Communist party needed to decide what sort of relationship it wanted with the world.

“Does Xi want to have a peaceful relationship with everybody in the region or in the world, or does he want to be a in a dominant position so that everybody listens to him, listens to China?” she said.

She also confirmed the presence of US military trainers on the island, the first time she has personally done so, but added it was “not as many as people thought”. “We have a wide range of cooperation with the US aiming at increasing our defence capability,” she said.

Her interview was recorded on Tuesday, a day before Biden told leaders at the East Asia Summit – an annual meeting of 18 Asia-Pacific nations – of his concern at China’s actions in the Taiwan Strait, saying they undermined peace and stability in the region.

“The president also reiterated the US commitment to the international rules-based order and expressed concern over threats to that order,” the White House said in a statement. “He made clear that the United States will continue to stand with allies and partners in support of democracy, human rights, rule of law, and freedom of the seas.”

The comments from Biden come during a surge in Chinese military activity near the island that China regards as a renegade province and has vowed to reclaim by force if necessary.

Last week, Biden set off alarm bells in Beijing by saying the US had a firm commitment to help Taiwan defend itself in the event of a Chinese attack. The White House later downplayed the president’s comments, which came during a CNN town hall, and said he did not mean to imply any changes in the US “one-China policy”, which recognises Beijing but allows informal relations and defence ties with Taipei.

Biden’s comments on Wednesday came after China said Taiwan had no right to join the United Nations, in response to a US call for the democratic island to have greater involvement in the world body.

In a statement marking 50 years since the UN general assembly voted to seat Beijing and boot out Taipei, the US secretary of state, Antony Blinken, said on Tuesday he regretted that Taiwan had been increasingly excluded on the world stage.

“As the international community faces an unprecedented number of complex and global issues, it is critical for all stakeholders to help address these problems. This includes the 24 million people who live in Taiwan,” he said.

China considers Taiwan, to which nationalist forces fled in 1949 after losing a civil war to the communists, to be a province that needs to be reunified, by force if necessary.

In response to Blinken’s statement, China emphasised its position that Taiwan’s government had no place on the global diplomatic stage. “Taiwan has no right to join the United Nations,” Ma Xiaoguang, a spokesperson for the Taiwan Affairs Office in Beijing, said. “The United Nations is an international governmental organisation composed of sovereign states … Taiwan is a part of China.”

The US has long called for Taiwan’s inclusion in UN activities.

Taiwan’s foreign minister, Joseph Wu, thanked the US for its support: “We appreciate it very much,” he said. “We’ll continue to fight for our rights in international organisations.” He said the situation was “growing more dangerous” as China continued to send troops into the Taiwan Strait. “We are determined to defend ourselves,” Wu said.

The latest statement adds to escalating diplomatic rhetoric and military posturing over Taiwan. China regularly sets records for its number of warplane flights near the island, and the US president last week told a televised forum his country was ready to defend Taiwan from any Chinese invasion.

Those comments were quickly softened by the White House amid warnings from China, continuing a strategy of ambiguity on whether the US would intervene militarily if China attacked.

The US switched recognition to Beijing in 1979 but Congress at the same time approved the Taiwan Relations Act, which obliges it to supply weapons to the island for self-defence.

Blinken reiterated on Tuesday that the US recognised only Beijing – but he emphasised the democratic credentials of the island of 23 million people. “Taiwan has become a democratic success story,” he said. “We are among the many UN member states who view Taiwan as a valued partner and trusted friend.” Tsai Ing-wen, the president of Taiwan, welcomed Blinken’s remarks. “Grateful for US support for expanding Taiwan’s international participation,” she tweeted. “We stand ready to work with all like-minded partners to contribute our expertise in international organisations, mechanisms & events.” 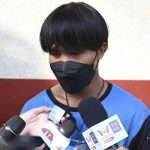