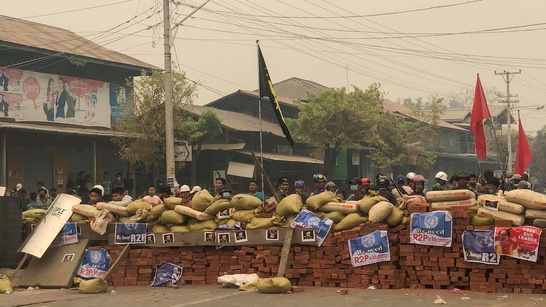 Protesters defend themselves from the troops in Kale, Sagaing region, Myanmar March 28, 2021 in this picture taken March 28, 2021 obtained by REUTERS. THIS IMAGE HAS BEEN SUPPLIED BY A THIRD PARTY. NO RESALES. NO ARCHIVES. THIS PICTURE WAS PROCESSED BY REUTERS TO ENHANCE QUALITY. AN UNPROCESSED VERSION HAS BEEN PROVIDED SEPARATELY

More than 200 civil society groups, including Human Rights Watch and Amnesty International, called on the U.N. Security Council on Wednesday to impose an arms embargo on Myanmar to help protect civilians peacefully protesting a military coup.

Since the military seized power on Feb. 1 and ousted an elected government led by Nobel laureate Aung San Suu Kyi, Myanmar has seen daily protests and a surge of violence with security forces killing hundreds of civilians.

“Imposing a global arms embargo on Myanmar is the minimum necessary step the Security Council should take in response to the military’s escalating violence,” the civil society groups from around the world said in a joint statement.

However, diplomats say such a move by the 15-member Security Council is unlikely because China and Russia – who are veto-powers along with the United States, France and Britain – have traditionally shielded Myanmar from any strong council action.

“We are not in favor of imposing sanctions and we do take it as the last resort in tackling conflicts,” China’s U.N. Ambassador Zhang Jun said on Monday when asked whether Beijing would support stronger U.N. Security Council action on Myanmar.

Since the coup the Security Council has held several closed briefings on the situation and issued statements expressing concern and condemning violence against protesters.

“The time for statements has passed. The Security Council should take its consensus on Myanmar to a new level and agree on immediate and substantive action,” the civil society groups said. “Myanmar’s people cannot afford to wait any longer for the Security Council to take action.” 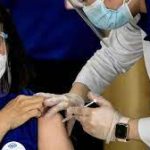 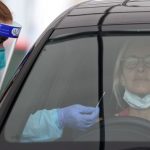