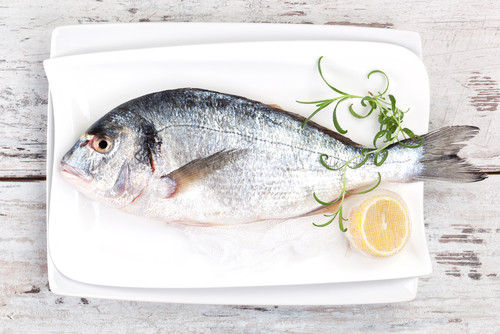 Whether you’re in the wild and have caught a fish that you plan to cook over a campfire or you’re at home in your kitchen, a whole fish makes a delicious and impressive meal.

But before you get to the cooking and eating, you need to prep the fish, which means trimming the fins, removing the scales, and cleaning it (i.e. removing the guts). If you’re planning to cook your fish whole, that’s all the prep there is. But if you’re planning to fillet it before cooking, there’s a bit more work to do after that, all of which we’ll describe below.

If you’re cooking a whole fish (i.e. not filleting it), you can get away with just the shears and the butter knife for scaling. But if you’re going to fillet your fish, you’ll need a sharp fillet knife.

A fillet knife is one with a very sharp, narrow, and flexible blade. Don’t expect to pick it up for the first time and use it skillfully. If you’re not confident in your filleting skills, there’s nothing wrong with cooking the fish whole—in fact, it’ll be more flavorful.

Different fish will have different cosmetic features, but anatomically, fish are built the same way. Which means the procedure below will work for just about any fish you’re able to hold in your hand.

How to Scale the Fish

Remove the fins with your kitchen shears. The top fin along the spine is called the dorsal fin. The ones on the chest are the pectoral fins. The belly fins are called the ventral fins and the tail fin is called the caudal fin.

You’re going to snip all of these fins off, as close to the body as you can. Note that the dorsal fin in particular can have some very prickly bones in it and trying to scale the fish with it still attached can lead to injury. In general, scaling is much easier with the fins removed. For the sake of presentation, though, you can leave the tail fin on—it won’t really be in your way during scaling.

If you’ve ever watched a professional scaling a fish with a knife, you’ll see that they hold the fish by the head and use a hand to scrape the knife against the scales towards their other one. Because this is a good way to cut yourself, you should avoid doing it this technique. Even a butter knife can cut you just as badly, or worse, than a hunting or fillet knife.

Instead, hold the fish by the tail while you scrape off the scales—especially if you’re camping and possibly many miles away from the nearest emergency room.

If you’re doing this indoors, a deep sink makes it easier. Just keep in mind that if your sink is shallow, things will get messier as the scales go flying.

How to Clean the Fish

Snip the gill where it meets the lower jaw. Now holding the fish with your thumb in the space underneath the gills, insert the point of your shears into the hole in the bottom of the fish’s belly called the vent (although you can probably think of one or two other names for it) and snip all the way up the belly.

Once this is done, you’ll see another bit of tissue connecting the upper part of the gills to the body. Snip this and you ought to be able to grasp the gills and pull downward, removing the gills and all the viscera in one smooth motion.

How to Fillet the Fish

If you’re going to fillet the fish, you can just split the belly and remove the viscera, then remove the gills and head together.

To remove the head, start your knife at the top of the bony ridge behind the gills and cut around and down, making sure you include the pectoral fins in the portion you cut off, down toward the centerline of the fish. Now flip the fish over and start your cut there, and continuing up and around the gills, leaving a kind of V shape at the top of the fish. Now simply twist off the head (and save it for making fish stock).

To fillet, start at the top of the back where the dorsal fins are and insert the tip of the knife just alongside the spine and slice all the way down toward the tail. Note that you’re not taking off the whole fillet with this cut, you’re just making a cut about an inch or so deep along the spine.

Then once that’s done you can finish the cut by pulling the flesh away from the bones while using the tip of the knife to loosen it, just following the natural seam where the flesh meets the bones. You don’t need to apply much pressure. Just let the ribs guide your knife.

Turn the fish over. But before you repeat the process, an important note: Whereas you started your cut at the head and cut back toward the tail, this time you’re going to start at the tail and cut up toward the head. Why? Because working with the other side of the fish means your arm would be in the way.

Once finished, you have beautiful fish fillets to cook with. Remember to keep the carcass, including the head, for making fish soup or fish stock. 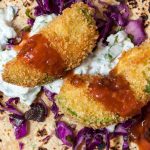 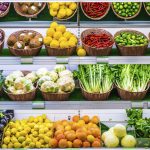